Not a transitional fossil.

According to proponents of evolution, PRATTs are Points Refuted a Thousand Times—arguments by creationists against evolution that are easily refuted, yet keep coming up again and again. I’ve dissected a few of them so far to try to figure out what underlying misconceptions make them so hard to get rid of. Sometimes, it’s vague or unclear language that lets them sidestep the counterarguments, so if you want a more productive debate, you have to be very precise about your language. In the case of micro- versus macro-evolution, creationists mainly say that evolution is unbelievable or unreasonable. In that case, I feel like the way to move forward is to shift the argument from the facts to the plausibility of evolution’s claims so that it can’t be dismissed so easily.

Now, it’s time to get into the actual evidence for evolution and tackle perhaps the biggest, most widely used, and most bitterly debated PRATT in this field:

“There are no transitional fossils.”

Transitional fossils are fossils of animals or plants that are in the middle of evolving (over thousands of generations) from one type of creature to another. The most famous transitional fossil, the one that was discovered within Darwin’s lifetime, is Archaeopteryx, a prehistoric animal that appears to be half-dinosaur and half-bird. The infamous “Missing Link” is another transitional fossil between apes and humans that eluded scientists for a long time, although they eventually found it: Lucy.

But creationists claim that no transitional fossils have ever been found anywhere, even though biologists can point to many specific examples. How did this happen?

It’s a bit hard to find an overarching fallacy behind the notion that there are no transitional fossils. Most of the arguments I can find at the surface level seem to involve finding fault with any individual example that is given. They may claim that a fossil isn’t really transitional. (“Archaeopteryx isn’t transitional. Birds appeared fully-formed before that.”) That it was misidentified. (“Australopithecus sediba isn’t transitional. It was just a juvenile ape.”) Or they just plain misinterpret evolutionary claims. (“Tiktaalik isn’t a transitional ‘fish with legs’ because it couldn’t walk. It just happened to have fins that looked like legs.”) Ironically, the use of examples like these may be the very reason this argument keeps coming up over and over. Evolutionists respond to the assertion that there are no transitional fossils by bringing up new examples, and creationists keep shooting them down.

At first, this may seem hopeless. Creationists believe evolution is false, so there will never be a specific example they find unassailable. But there is another level we can hold this debate on: what does it mean for a fossil to be transitional? What does the theory of evolution predict we should see in general as opposed to these specifics? And it’s on this level that we can see the flaws in creationist thinking.

In one of the most infamous examples of creationists failing to understand evolution, in 2007, Ray Comfort and Kirk Cameron claimed (seemingly unironically) that if evolution were true, then we should see a “Crocoduck”—a photoshopped animal with the body of a duck and the head of a crocodile—as a transitional animal between a crocodile and a duck.

This is, of course, crazy. And this is an extreme case even by creationist standards, but they’re not the only ones who have a distorted view of transitional species. Look at some of Kent Hovind’s statements in his debate with Aron Ra:

The problem with this is that evolution doesn’t predict a tomato growing on a corn stalk. In fact, it predicts that we should not see that because corn is in the grass family, and tomatoes are in the nightshade family. One is not the descendant of the other; they are both descendants of a distant common ancestor among the earliest flowering plants.

But as with the other creationists above, that’s only a specific example, and not the best one they could make. To use another example from the Ra-Hovind debate, seals are believed to have evolved from primitive bears. This actually is an ancestor-descendant relationship, so it’s a valid case to look at. Creationists would say the idea that seals came from bears is ridiculous because bears and seals are obviously different animals, and (more importantly) you’ll never see a bear give birth to a seal. 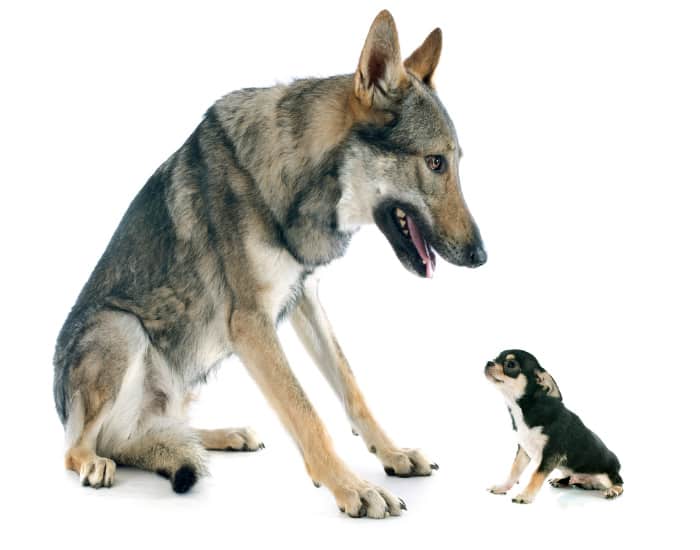 But this is fallacious because this is not what evolution claims. You wouldn’t expect a bear to give birth to a seal any more than you’d expect a wolf to give birth to a Chihuahua. It takes many, many generations—millions of years with tiny changes each generation—for something that doesn’t really even look like a bear yet to turn into something that first looks like an otter, then a sea lion, and finally a true seal. It’s the same principle (just with a bit larger change) as a wolf changing over many generations to something that looked like a Siberian Husky, then…well, Native American dogs aren’t well documented, but it probably looked similar to a dingo for a while, and eventually a Chihuahua.

Likewise, the transitions are smooth. You wouldn’t expect to see a bear with a seal’s head any more than you’d expect to see a wolf with a chihuahua’s head, or vice versa. (Creationists might not exactly say that the theory of evolution requires these things, but they strongly imply it and count the fact that we don’t see it as evidence against evolution.) The changes are far smoother than that, and anything we see in the middle of the gradual morphing from one animal to the other is considered a transitional fossil.

The second issue with transitional fossils is that some of them really are “missing” (for the moment). There are transitional forms that we haven’t found yet because the fossil record is incomplete. Indeed, we expect it to be incomplete because fossilization is very rare. There is a common creationist suggestion that we should never see any gaps or “missing links” in the fossil record if evolution is true, but we’re probably never going to fill in all the gaps because so few animals and plants become fossils.

But this is not the biggest flaw in the argument. Creationists claim that the supposed lack of transitional fossils is evidence against evolution. But it’s especially aggravating when these same creationists claim (or at least strongly imply) that we should “suddenly” see a dog give birth to a cat, a bear give birth to a seal, or at the very least, a normal fish give birth to a mutant fish with fully-formed legs—at a single point in the thousands or millions of generations in the evolutionist model. I could be generous and say that this is based on a misunderstanding of the already-disputed concept of punctuated equilibrium, but the fact remains that if it were true, it would perfectly explain the lack of transitional fossils! If a fish just “suddenly” developed legs, a far smaller fraction of individual animals would be transitional, and it would be much less likely for there to be fossils of them.

Question 1: Regardless of whether you believe it, do you accept that the theory of evolution does not require an animal to give birth to a radically different one (the crocoduck being an extreme example), but rather small changes over a great many generations, similar to what we can see directly with dog breeding.

Question 2: Will you admit that if evolution did work by one kind of animal suddenly giving birth to a completely different kind of animal, there would be so few transitional fossils that it would be perfectly reasonable that we haven’t found any?