I’m slowly moving forward with my series about evolution. In my previous posts, here and here, I’ve tried to explore why debates between evolution and creationism are so unproductive. One thing I’ve noticed is people on both sides of the debates being sloppy with their language and poking holes in their opponents’ arguments that wouldn’t have appeared with more careful wording.

Today, I want to follow on from my second post and get into the substance of the debate, addressing specific, often over-played points that Creationists bring up. The argument I want to dissect today is:

Or, as Creation Today puts it, out of the six different “meanings” of evolution, “[only] micro-evolution has anything to do with real science.”

In simpler terms, creationists admit the truth of microevolution (changes in gene frequencies within a species) because you can see it in a lab—or on a farm, for that matter. That’s how we got over 200 breeds of dog from the wolf. But they do not believe that these changes can lead to whole new “kinds” of animals (or plants) as in a dog to a cat. Creationist Kent Hovind would say there are limits to what microevolution can do, and changing a dog to a cat is beyond it.

Now, the specific example of a dog to a cat is getting into the weeds regarding the problem of “created kinds” (see my first post). A dinosaur to a bird would be more appropriate. But the larger problem is that this argument doesn’t hold up to scrutiny because creationists attribute far greater powers to micro-evolution than “evolutionists” do even to macro-evolution! 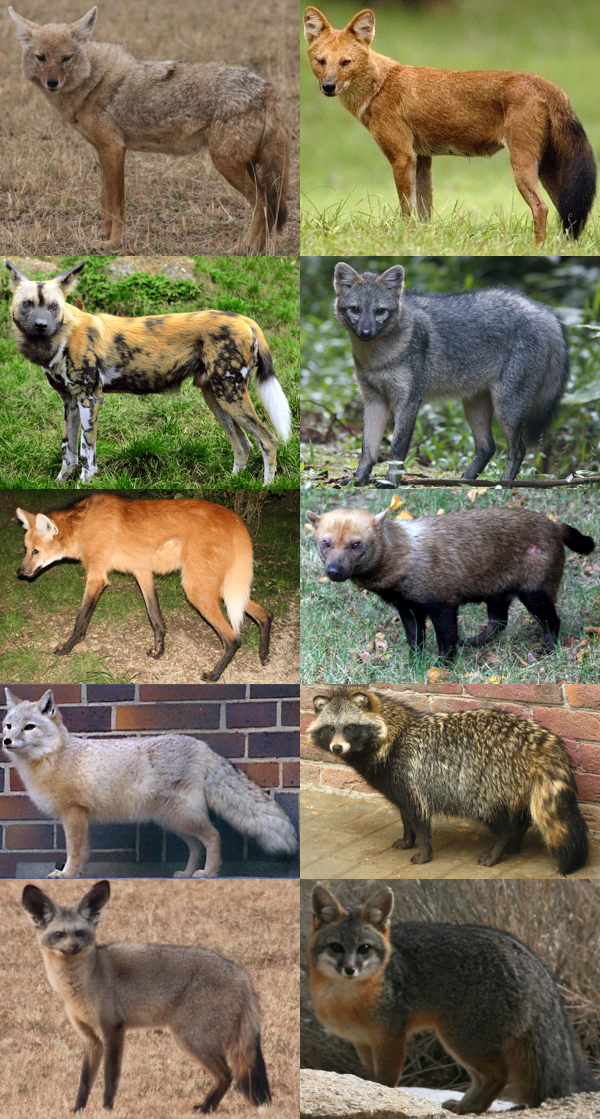 Let’s take a closer look at the dogs to explain this. Creationists (at least those who invoke “created kinds”) believe that all canids—members of the dog family—are descended from a single pair of proto-dogs that were on Noah’s Ark. After they got off the Ark, their descendants diversified into the 34 species of canids that exist today, and still more that we’ve discovered as fossils. Domestic dogs, wolves, coyotes, foxes, jackals, African painted dogs, and more all arose from that single pair of proto-dogs, probably in the space of a few hundred years, and certainly not more than a couple thousand.

Now, what does evolution say? Evolution says that all canids are descended from a single species of proto-dogs that probably lived on the plains of North America. Over a long time, the descendants of this species diversified into the 34 species of canids that exist today, and many extinct ones.

Also, creationists believe that dogs were created by God independent of other animals. They call this the “orchard model of life” as opposed to evolution’s “tree of life,” with many small trees representing different “created kinds.” Meanwhile, evolutionists believe that the first dogs were descended from a still earlier animal that probably looked vaguely like a weasel, and which also gave rise to other caniforms: weasels, bears, raccoons, and seals.

So we have two problems here. First, to make the Flood narrative work literally, creationists have to widen the definition of microevolution to cover a lot of territory that normally falls under macroevolution—all those dog species—and second, to fit it into a few hundred years, they have to crank it up to Ludicrous Speed.

The first issue raises the question, if you’re already widening microevolution to cover the whole family of dogs, is it reasonable to widen it still further to encompass all life? I would say yes. Because the orchard model of life already creates new kinds of animals—not baramins (“created kinds”), but new kinds in the only way that matters in nature: breeding populations.

A dog and a wolf can interbreed, and they are considered the same species. A wolf and a coyote can interbreed, but are considered different species because they mostly don’t in the wild. However, a dog and a fox cannot interbreed because they have 10 chromosomes’ difference between them. If you can’t breed them together, are they really the same “kind”? I feel like creationists have a suspicious tendency to gloss over foxes when talking about the “dog-kind,” and if you called them on it, I suspect they would say, “Well, maybe we got that wrong, and foxes are a separate kind.” But if you want to apply that to all of the thousands and millions of species out there, you’re going to have a hard time of it. I think it makes more sense to say that if you can get both dogs and foxes from the same root, it’s perfectly reasonable to also get both dogs and bears.

What about the time spans? Here, the creationist position seems like a stretch even to the untrained eye. Maybe it is possible with deliberate selective breeding to create 34 species of dogs from a single breeding pair in the space of a thousand years. But selective breeding isn’t magic. Even if God did it, He used methods that are understandable to humans (if the orchard model is correct). If it’s possible for deliberate selective breeding to do this in a thousand years, is it possible for random variation to do it in millions? Creationists would of course say no. The odds against it are too great. But I would argue yes, it is.

There’s a phenomenon in physics called a random walk, which describes the behavior of objects subject to random forces, like dust motes in the air. In a random walk, objects and systems will drift over time. You don’t know where they will drift, but you know they will. After some complicated math, it turns out that the amount of drift is the roughly square root of the number of steps (some useful measure of time). That may sound esoteric, but consider it applied to evolution. If a thousand generations of intelligent, directed, selective breeding can produce all of the species of dogs, then, having established that it’s possible under any circumstance, in a random walk, we should expect that a million generations of random variation can do the same thing—millions of years.

This isn’t meant to be a definitive argument. It’s a sanity check: does millions of years make sense for evolution? Yes, it does. But creationists want it to happen thousands of times faster. That only makes sense if God was purposefully directing the creation of new species by selective breeding. And, okay, I don’t know; I wasn’t there. But we have reliable records going back more than halfway to the purported time of the Flood, and we certainly don’t see any sign of this turbo-charged evolution there. Absent other evidence, the creationist version doesn’t pass the sanity check.

Also, note that this argument doesn’t guarantee that the result of this random walk will be the specific 34 species of dogs we see today. The odds of any particular outcome really are near-impossible, and creationists like to use that to discredit the argument. But there has to be some outcome of (plausibly) a few dozen different species, and the actual dog family we see is a reasonable outcome. Millions of years of random variation can get you from Point A to Point B.

Once again, I want to end with “Questions for Creationists.” I’m trying to formulate questions that can be asked in a debate, which will force creationists to confront the flaws in their arguments, while still being fair and charitable towards them and not playing gotchas. The arguments I made above readily suggest two questions:

Question 1: Will you admit that the creationist “orchard model of life” is a form of macroevolution, not microevolution, given the dictionary definition of macroevolution: “evolution that results in relatively large and complex changes (as in species formation)?”

Question 2: Evolution claims that by the same process humans used to breed a chihuahua from a wolf in a few thousand years, natural selection can, over millions of years, breed a wolf from a primitive weasel-like mammal, a more primitive rat-like mammal, a primitive fish, and so on. Regardless of whether this really happened, what argument do you have that this is implausible or impossible given that you have already accepted changes between species?

I'm a full-time astrophysicist and a part-time science fiction writer.
View all posts by Alex R. Howe →
This entry was posted in Biology, Debunking, Science and tagged evolution, evolution debate, PRATTs. Bookmark the permalink.
%d bloggers like this: