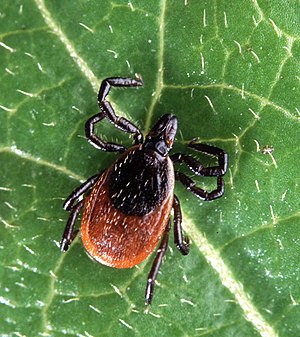 Q: What if I swallow a tick that has Lyme disease? Will my stomach acid kill the tick and the borreliosis, or would I get Lyme disease from the inside out?

Randall’s response: “Just to be safe, you should swallow something to kill the tick, like Solenopsis geminata (tropical fire ant). Then, swallow a Pseudacteon curvatus fly to kill the ant. Next, find a spider…”

My response: I’m going to be honest…I’ve got nothing here.

I tried looking up the pH tolerance of Borrelia bacteria and didn’t find much. Then I tried to look up whether Borrelia is ever found in the stomach, and I got a big mess of claims, very few of which I actually trust.

Lyme disease is a complicated beast. It can be hard to diagnose, hard to treat, and symptoms can linger for months even after successful treatment. It can cause wide-ranging symptoms, and it attracts a lot of quacks. Websites claim that Lyme disease can mask itself as a bunch of other diseases, including stomach problems, and it is absolutely true that it can really screw up your liver. There is a worrying amount of overlap between websites blaming Lyme for everything under the sun and websites offering alternative remedies and/or claiming to support the unrecognized diagnosis of “chronic Lyme disease”.

Advocates of the chronic Lyme disease hypothesis claim that Lyme disease is often not wiped out by a normal course of antibiotics and can linger for months or years and can cause any number of symptoms, including many symptoms not seen with a typical Lyme diagnosis. Opponents point to studies that indicate that “chronic Lyme” sufferers either have the well-known “post-treatment Lyme disease syndrome,” without an ongoing infection, or they simply never had Lyme in the first place and have had a misdiagnosis of chronic fatigue syndrome or something similar. They have also raised the alarm of the claimed chronic Lyme disease contributing to the overuse of antibiotics.

So the bottom line is, I don’t know. There are a lot of claims out there, and I don’t know enough about medicine to separate the truth from the pseudoscience. I’ll just note that we know Borrelia is carried in the tick’s stomach to infect humans, so I have feeling that swallowing it isn’t going to end well for you.

I'm a full-time astrophysicist and a part-time science fiction writer.
View all posts by Alex R. Howe →
This entry was posted in Medicine, What If? Rejects and tagged Lyme disease, pseudoscience, what if?. Bookmark the permalink.
%d bloggers like this: