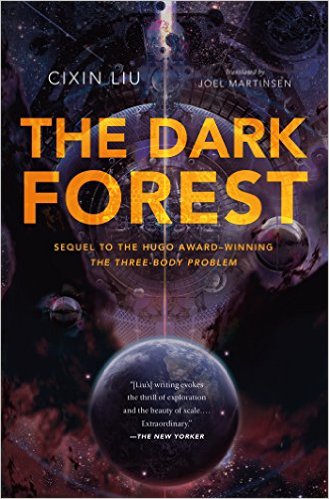 The Dark Forest is the sequel to the The Three-Body Problem, which I reviewed previously. This is the second book in Liu Cixin’s Remembrance of Earth’s Past trilogy, the bestselling science fiction saga in China. The English translation came out last year, and I’ve finally had time to read it.

The Trisolarans, technologically advanced beings from a dying planet around Alpha Centauri, have sent an invasion fleet to conquer Earth and wipe out the human race. But this isn’t the kind of invasion we normally see in fiction. The alien fleet will not arrive for 400 years. The bad news is that they’ve sent sophons–artificial intelligences imprinted on subatomic particles–to interfere with our scientific experiments and stop our technological progress.

Humanity has but one advantage: the Trisolarans are telepathic, and that means they don’t understand secrecy and deception. The United Nations chooses four people to be the Wallfacers–people who will invent secret plans in the privacy of their minds to fight the Trisolarans and will be given great resources to carry them out. Two of the Wallfacers are military leaders and one a brilliant scientist, but the fourth is an unknown Chinese astronomer, Luo Ji, with no major accomplishments to his name. He has no idea why he was chosen and no idea how to save the world. But for some reason, the Trisolarans want him dead…

The Dark Forest is, in many ways, a mystery novel, but with many mysteries to untangle. It’s very well written, with plenty of twists of plot and turns of fortune. Each of the mysteries is well-crafted, and most of them had the desired effect on me (as David Brin says) to make me say, “Of course! Why didn’t I see that before?” The storytelling is top-notch and successful drives the plot from “all is lost” to “all is won” and back more than once while still seeming (mostly) believable. It’s thought provoking, too, and the ending was positively brilliant.

I have to issue a couple of criticisms, however. The first, relatively minor, is that Mr. Liu’s lack of technical knowledge shows more here than in the previous book–thinking that large telescopes are made with lenses instead of mirrors, for example. But my main problem with the book is its deep cynicism. That the United Nations would rule trying to build an escape fleet a crime against humanity because no one could decide who got to go on it may be believable from a Chinese perspective (although I can’t state that with confidence one way or the other), but it seems absurd from my American perspective. And at risk of spoilers, the foolish way Earth’s fleet meets the Trisolaran probe is even worse, and the whole concept of the Dark Forest of space that Luo Ji lays out seems to be obviated by the existence of the sophons.

This cynicism definitely detracted from the story more than in the first book. And yet, the quality of the storytelling kept it very compelling. And with an ending that looks at first glance like a final curtain call, I’m very interested to see what new challenges await in the final installment, Death’s End, which will be available in English this September.

I'm a full-time astrophysicist and a part-time science fiction writer.
View all posts by Alex R. Howe →
This entry was posted in Book reviews and tagged Cixin Liu, The Dark Forest, The Three-Body. Bookmark the permalink.
%d bloggers like this: