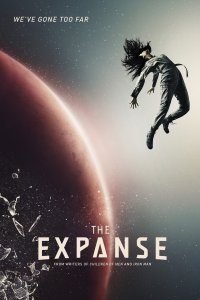 Okay, so this is another review that got delayed, and there’s one more coming, but then I’ll be caught up. The Expanse is a new show on Syfy based on the series of novels of the same name by James S. A. Corey (who is actually two people–it’s complicated).

The Expanse is a new space opera series at a time when that kind of thing seems sadly lacking. Like many such recent shows, it takes a darker tone than the light and fluffy Star Trek, going for more of a film noir vibe, but it was pretty well done, despite a few scientific pitfalls.

In the 23rd Century, Mars is an independent nation, and the Asteroid Belt has been heavily colonized by Earth. Belters face chronic health problems from microgravity and resent Earth and Mars for plundering the Belt’s abundant water, forcing them to rely on ice shipments from Saturn. When a desperately needed ice hauler, the Canterbury, is destroyed by what appears to be a Martian warship, Earth, Mars, and the Belt all race against time to survive and stop a war. But something far more sinister may be going on.

Three different “detectives” with very different stories are on the case. UN Undersecretary Chrisjen Avasarala, on Earth, is trying to prove that a Belter terrorists group, the OPA, was behind it all. Jim Holden, a survivor of the Canterbury is trying to figure out who’s destroying ships in the outer Solar System before they get him, too. And Detective Miller on Ceres is just trying to solve a missing person case–except that Julie Mao seems to be tied up with all of it.

The show was well done, with a diverse cast, compelling characters, and a gripping plot that artfully brought its threads together through their various twists and turns. Much of the science was actually really good: the “flip and burn” maneuvers, for example. Some was silly, of course, like the all consuming “protomolecules”, and sound in space was usually applied. And honestly, I don’t think Earth could deplete the vast reserves of water on Ceres in a million years, let alone a hundred, but we can let that go. It was still a pretty good show and worth watching.

I'm a full-time astrophysicist and a part-time science fiction writer.
View all posts by Alex R. Howe →
This entry was posted in TV Reviews and tagged James S. A. Corey, Syfy, The Expanse. Bookmark the permalink.
%d bloggers like this: