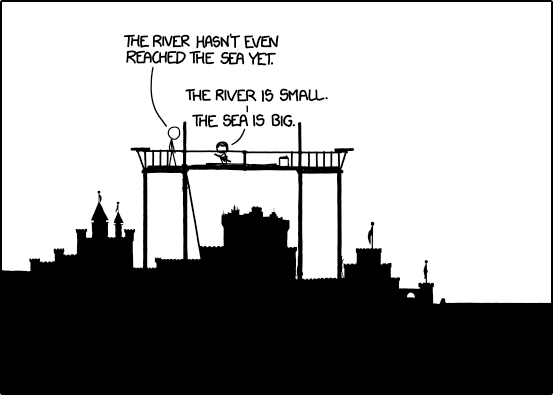 Frame 563 of Time, as counted by Geekwagon. Credit: xkcd/Randall Munroe.

For the past four months, perhaps the most unique work of science fiction I have ever personally seen has been playing out over at xkcd: Time. If you don’t know about the xkcd webcomics, you should check them out. They are awesomely nerdy, very funny, and often amazingly informative. This chart alone is worth seeing for a nice “dose” of perspective.

Last year, Randall Munroe created Click and Drag, a huge black-and-white world that you can explore by…clicking and dragging, possibly creating the world’s largest comic strip. Time explores the “third” dimension by showing a single comic strip panel that changes over time: every half hour for the first few days, then every hour after that. In that panel, the story of an idiosyncratic future of wonder and adventure slowly played out. Sometimes like a movie playing super-slow and sometimes like a comic strip updating really fast, and sometimes a puzzle itching to be solved, it always made one want to keep an extra browser tab open for it.

Last Friday, Time finally reached its end after 3,099 frames, lots of carefully crafted worldbuilding, and, by all accounts, a lot of work. Read Randall’s own take on the comic here. I must say that as unconventional as it is, the story is engaging and well-written. And I encourage you to go to this link to click through it yourself. As a coda, the actual comic still changes every hour, shifting randomly between the last five frames.

But the comic is only half the story. The forum that grew up around it has been equally entertaining. In four months, it has amassed over 50,000 posts, making it the third longest on the site and comprising a quarter of all discussion about the comics themselves. Over time, the forum went basically insane, developing its own culture: measuring time in “newpix” (new pictures), creating its own religion, the worship of the “GLR” (Great Lord Randall), describing all animals as “molpies” based on a throwaway comment, and generally trying to solve every puzzle they could find or thought they could find. There’s even a wiki, in case you get lost.

The forum genuinely enriched the story, as it was they who figured out when the story was taking place (April of 13,291 AD), where (the dried up Mediterranean sea), and making endless (usually silly) predictions about what would happen next.

Will we see anything else like Time in the future? Probably not from xkcd, but hey, it’s a big Internet. Some of the followers of the “OTC” (One True Comic) deprived of their ability to be “timewaiters”, may try to emulate GLR and create their own versions of this comic/movie form. Probably not, but stranger things have happened.

I'm a full-time astrophysicist and a part-time science fiction writer.
View all posts by Alex R. Howe →
This entry was posted in Art, Fiction and tagged science fiction, time, webcomics, xkcd. Bookmark the permalink.
%d bloggers like this: