Book Review: The Massacre of Mankind by Stephen Baxter 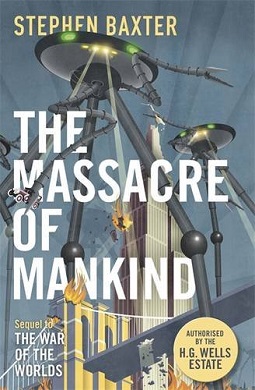 Stephen Baxter is one of my favorite sci-fi authors. I’ve reviewed several of his books before, but one that I haven’t is The Time Ships, which was a sequel to H. G. Wells’s The Time Machine authorized by the Wells estate for the 100th anniversary of its publication in 1895.

I mention this because The Time Ships is one of my all-time favorite books and because Baxter recently wrote a sequel to another classic novel. Two years ago, the Wells estate authorized him to write a sequel to The War of the Worlds for that novel’s 120th anniversary. That sequel is The Massacre of Mankind, and while it’s not as good as The Time Ships, it was still a fun read and a very insightful and well-thought-out follow-up to Wells’s classic.

Despite its grandiose title, Wells’s original The War of the Worlds concerned a very small Martian invasion—just ten ships land in Surrey, England, and a few dozen Martian “fighting machines” come out. They still do enormous damage because they carry deadly disintegrating “Heat-Rays” and are seemingly impervious to Earth weapons, but it’s a very local affair before they’re wiped out by Earth bacteria.

In The Massacre of Mankind, the Martians step up their game, first ten times and then a hundred times the scale of their 1907 invasion of Surrey. In 1920 and 1922, they send a powerful invasion force to take over Earth (and Venus). The humans have gained some technology from their first invasion, but the Martians are still at a great advantage. All the military might of Earth can only match a fraction of the Martians’ strength. It seems that mankind’s only hope is Walter Jenkins, the mentally traumatized narrator of The War of the Worlds, and his sister-in-law, Julie Elphinstone, whom he sends on a secret mission behind enemy lines to try to communicate with the Martians.

One thing that always impresses me about Stephen Baxter is how meticulously he plans and researches his novels. The Massacre of Mankind feels a lot like a sequel H. G. Wells would have written. It’s not exact. Baxter eases off Wells’s heavy-handed social commentary and even slips in a few digs at Wells himself. He also mixes early twentieth century science and modern science together. Venus and Jupiter are depicted as habitable at the same time that the Martians are using the far more modern concept of kinetic orbital strikes (which have the force of an atomic bomb) to destroy their military opposition. Yet for all this, other elements like the improbably large earthworks built around the Cordon are clearly taken from Wells’s work.

It might be more accurate to say The Massacre of Mankind is a sequel Wells could have written had he been so inclined. It really does feel like an early twentieth century novel for the most part. Either way, it’s a fascinating story, and it extends the world created by the original work masterfully.

And now I’m wondering if Mr. Baxter has any ideas about a sequel to The Invisible Man or The Island of Doctor Moreau.

I'm a full-time astrophysicist and a part-time science fiction writer.
View all posts by Alex R. Howe →
This entry was posted in Book reviews and tagged H. G. Wells, stephen baxter, The Massacre of Mankind, The War of the Worlds. Bookmark the permalink.

1 Response to Book Review: The Massacre of Mankind by Stephen Baxter