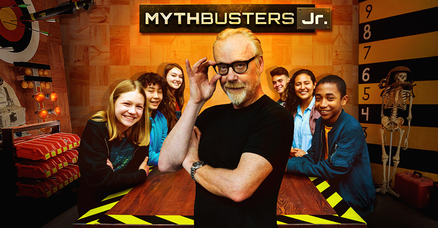 Last year, the Science Channel continued the long-running show MythBusters with two new hosts, Jon and Brian, selected by a televised myth-busting contest. The new episodes were…underwhelming. I reviewed Jon’s and Brian’s season at the time, and I couldn’t give them that high a rating, but I thought they had potential.

Well, it seems the poor reception was shared by others because the show was quietly pulled from the schedule by the Science Channel with the last two episodes never aired in the United States. According to Reddit posts from Brian (BSforgery), there wasn’t a formal cancellation; instead these episodes are being held for a potential second that may or may not happen.

But in the meantime, we got a new show on the Science Channel, with Adam Savage coming back to host it: MythBusters Jr. This show is still like the original MythBusters, complete with full-sized myths and lots of things exploding, but the new Junior Mythbusters are six middle school and high school students (well, one’s a twelve-year-old college sophomore) with world-class skills in engineering, robotics, programming, and inventing. And this show is MythBusters back in top form.

Two things set MythBusters Jr. apart from the previous season. The first was the kids, of course, but that made a real difference. Brian and Jon tried, but they just didn’t have the chemistry that Adam and Jamie had that made people love the show. They were new to television, and they might have developed it in time, but the kids had it right off the bat, and I don’t think it was just because of Adam. All they had to do was have goofy kids being goofy kids, and it was like MythBusters never left.

The second thing that improved was scientific rigor. This was something I noticed in the last two seasons of MythBusters, starting back when Adam and Jamie were going it alone for their last season. They were getting lazy, not checking their facts, and not doing experiments that really tested the myths well enough.

For example, Adam and Jamie “Busted” the myth that an improperly steam-cleaned railroad tanker car could be crushed by atmospheric pressure. Yet a simple Google search proves that such things can happen, such as this demonstration. Yes, there are differences. It’s a tanker truck, not a railroad car, and they used a vacuum pump, not a steam cleaning, but that still should have bumped it up to plausible.

Later, Brian and Jon ruled “Plausible” the myth that listening to aggressive music causes aggressive driving. While this may indeed be plausible, their experiment was nowhere near good enough to say that. They had only five volunteers, and they did both tests (with and without music) on the same course in the same order, so the second run was skewed by already knowing the course. Earlier seasons did driving myths and any myths that require volunteers much better (though I didn’t agree with all of those, either).

But with MythBusters Jr., I didn’t notice any serious problems like that. The show is rarely great at rigor, but I didn’t notice any glaring mistakes. (Well, the domino one where they clearly should have used a smaller size ratio, but that was a minor point, and they got it to work.) Some of the myths might have been a bit silly or trivial, but the original MythBusters was no stranger to those either (pyramid power, anyone?). I think the kids really got their feet under them for this reboot, and I hope the show continues.

I'm a full-time astrophysicist and a part-time science fiction writer.
View all posts by Alex R. Howe →
This entry was posted in TV Reviews and tagged Adam Savage, MythBusters, MythBusters Jr.. Bookmark the permalink.
%d bloggers like this: