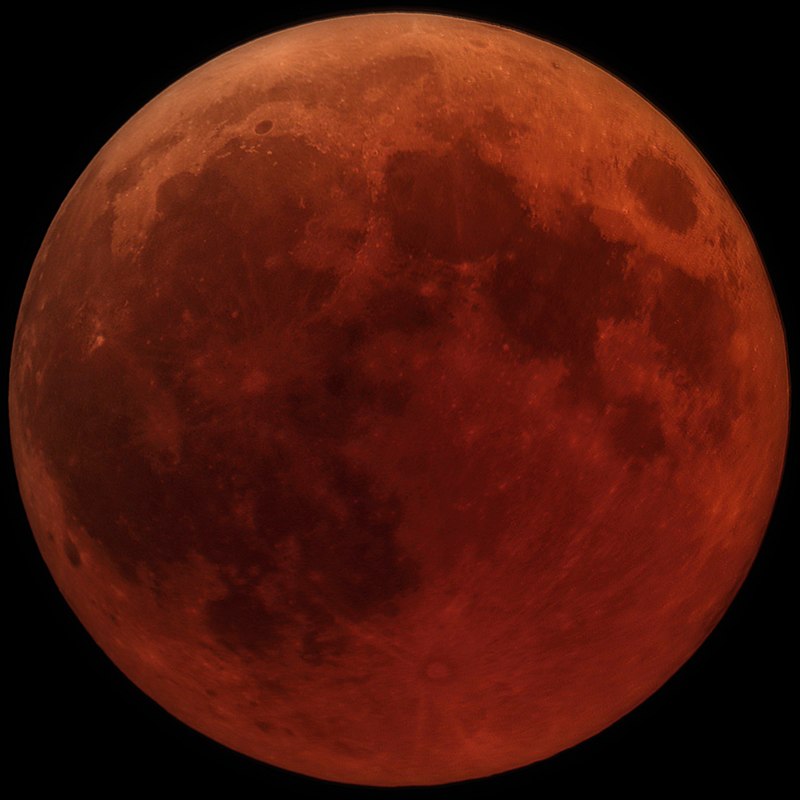 A photo of the lunar eclipse of July 27, 2018. Credit: Giuseppe Donatiello.

On the night of Sunday-Monday, January 20-21, there will be a total lunar eclipse. (Official NASA info.) This eclipse will be especially significant because it will be the first total lunar eclipse visible from most or all of North America since 2014, and there won’t be another one so easily visible from this continent until 2025. (Sadly, due to inclement weather, I haven’t been able to see one myself since 2010.)

The Moon will start to go dark at 9:36 PM Eastern Time on Sunday night, and it will be fully within the deep red umbra of Earth’s shadow from 11:41 to 12:43 Eastern Time. West Coast viewers will have an easier time of it, but for East Coast viewers, it will definitely be worth staying up for it.

For my international readers, you will be able to see the full eclipse from everywhere in North and South America except for the Aleutian Islands. Most people in Europe and West Africa will also be able to see it if you get up in the hours before sunrise on Monday.

You may have heard of this eclipse described in the media as the “Super Blood Wolf Moon,” or some variant thereof. However, this is just an overhyped and rather silly way of describing the Moon’s position in its orbit and in the calendar.

And it is NOT a portent of doom! Honestly, how does this nonsense keep coming up in this day and age?!

Now, these names do each mean something. The “Wolf Moon” is the name of the full moon in January, based on the Old Farmer’s Almanac, which is allegedly based on old Native American calendars (without much evidence). These calendars give each full moon of the year its own name, of which the best known is probably the “Harvest Moon” in September.

The “supermoon” is a rather silly name that started circulating in 2011 for a full moon when the Moon is at perigee (closest to Earth in its orbit) and appears slightly larger in the sky (or closer than a certain distance, which allows two or three “supermoons” in a row). This is an annual event, but it cycles around the calendar every nine years. Some people think this has astrological significance, and it came to mainstream attention after it was blamed for causing the Japanese earthquake and tsunami (it didn’t). Actual astronomers, on the other hand, think astrology is bunk and wish this term would just go away.

The “Blood Moon” is a poetic name for a total lunar eclipse because the Moon does not go completely dark, like a solar eclipse, but instead appears blood red, lit by sunlight bent through Earth’s atmosphere—essentially, the light of all the sunsets around the world. This terminology goes back to the Bible, where multiple prophecies say, “The Sun will turn to darkness [a solar eclipse], and the Moon will turn to blood [a lunar eclipse].” However, both kinds of eclipses are fairly common, happening once a year or so on a global scale, so as End Times prophecies go, this one is no more dire than, “And you will hear of wars and rumors of wars…and there will be famines and earthquakes in various places.”

As screwed up as our world is right now, this eclipse doesn’t foretell doom any more than any other eclipse of the past few millennia. So (unless you’re facing the other impending doom of this weekend’s winter storm), you should bundle up and go out to take a look at this beautiful astronomical sight.