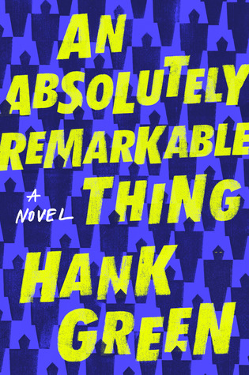 John Green is the famed young adult author of hits such as The Fault in Our Stars—but this post isn’t about him. His brother Hank Green, on the other hand, is an internet-famous science communicator and musician and co-host with his brother of the Vlogbrothers YouTube channel and a bunch of other stuff. But now, Hank has also joined his brother in the ranks of novelists with his debut, An Absolutely Remarkable Thing, which is equal parts sci-fi thriller and commentary on our modern internet and social media culture.

April May (yes, really), a twenty-three-year-old graphic designer, discovers a ten-foot sculpture of a robot that mysteriously appears on the streets of Manhattan at two in the morning. She names it Carl and makes a YouTube video about it, and she wakes up the next morning to find that she’s gone viral. It turns out there are sixty-four Carls in cities all over the world; no one knows where they came from or how they got there, and she got the first video of it.

Things only get weirder from there as it becomes increasingly clear that the Carls are not of this world, and April’s fame takes on a life of its own in this thrilling tale of social media and the state of our culture today.

No, really. It’s better than that makes it sound.

So, in addition to the book itself, I want to talk about the context a bit. This year has offered a wealth of stories that are really steeped in the internet culture and that can satirize it and offer social critique while still being a lot of fun. I put Ready Player One and the recent Ralph Breaks the Internet in this category, both of which are very good films. An Absolutely Remarkable Thing focuses more on the dark, corrosive side of social media as opposed to Ready Player One’s standard-fare cyberpunk or Ralph Breaks the Internet’s use of it more as a fun backdrop for a conventional story, but it still comes across quite well in this genre.

(I do have to wonder if the rush of stories like this in 2018 is a byproduct of the internet-political climate of the three years previous, but there’s no need to go down that rabbit hole.)

As for the book itself, I really liked it, and not entirely for conventional reasons. One of the interesting things about April as a protagonist is that she’s kind of a bad person. Not that she’s evil or malicious, but she certainly becomes addicted to her fame and wrapped up in herself, and that combined with her underlying insecurities causes her to constantly make bad decisions and drive away her real-world relationships one by one. She becomes someone she probably would have hated at the beginning, and while she recognizes this in her post-mortem analysis as she writes the book, we don’t really see her learn and grow at all during the story itself.

Breaking the mold like this is risky, but when done successfully, it really helps to put a good story over the top. Everyone loves the classics, but unconventional storytelling adds some flavor to our sometimes far too homogenized pop culture—even when it does uncomfortably hold up a mirror to ourselves. I think An Absolutely Remarkable Thing pulls it off.

The structure of the book was a little off for my tastes. The story is about April much more than the Carls, and it focuses a lot on the early days when she was still trying to figure things out. It takes about halfway through to even prove that the Carls are alien, but even so, it was a good story. I think Hank Green captures our fast-paced social media culture and weaves a (perhaps depressingly) realistic tale of how society would react to first contact—namely a surprising lack of over-the-top reactions and a gradual buildup of extremist opinions on both sides. It hits a little close to home, but as a realist in writing myself, I think that contributes to a very solid story all around.

I'm a full-time astrophysicist and a part-time science fiction writer.
View all posts by Alex R. Howe →
This entry was posted in Book reviews and tagged An Absolutely Remarkable Thing, Hank Green. Bookmark the permalink.
%d bloggers like this: