Q: What if everyone in Great Britain went to one of the coasts and started paddling? Could they move the island at all?

Randall’s response: “NO.” Also, a picture of people paddling on the shore, in which one of them says, “Wait, maybe we need to disconnect the Chunnel first.”

My response: Um…no. Great Britain is a mass of rock that is fused to Earth’s surface over an area of over 200,000 square kilometers (80,000 square miles). You’re not going to be shifting that. You’ll have infinitely better luck waiting for continental drift to do the job for you.

So let’s try to answer a bonus question instead. In Randall’s drawing, the people of Britain appear to be standing 20-30 feet apart on the shore while they’re paddling. Is this accurate to the size of Great Britain?

Well, the island of Great Britain has a population of about 61 million, and the length of its coastline is…uh-oh.

The length of a coastline is a notoriously difficult thing to define, and you have to construct a pretty arbitrary definition for the number to be meaningful at all. Click below to see why.

The infamous coastline paradox was discovered by Lewis Fry Richardson in 1951, who noticed that not just coastlines, but sometimes also national borders seem to have different lengths depending on how you measure them. This is because coastlines have a fractal structure, with ever-smaller peninsulas and promontories and bays and inlets as you zoom in. In fact, the discoverer of fractal geometry, Benoit Mandelbrot, wrote a famous paper studying this problem specifically regarding the coast of Great Britain. However, to better illustrate the problem, it’s easier to think about Norway. 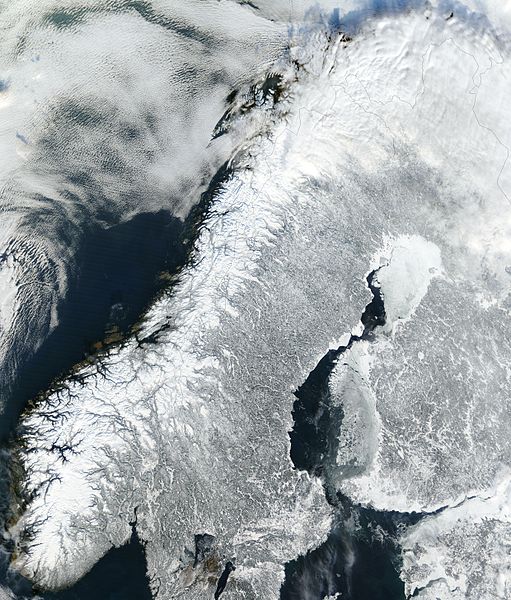 Think about the famously convoluted coast of Norway. If you wanted to measure the length of its coastline you’d have to keep going in and out of all the little fjords and smaller fjords on those fjords so that you would measure a very long shoreline in a relatively small linear distance. And if you rounded off and measured mile-by-mile, you would get a very different (and much smaller) number than if you went in and measured foot-by-foot.

Most coastlines are not as crazy as Norway’s, which was carved by glaciers in the last ice age and hasn’t had time to erode smooth. At the opposite end of the scale, the coast of South Africa, formed 150 million years ago and never touched by ice flows or volcanoes or other disruptive geological processes, is nearly smooth, and its length will be nearly the same whatever scale you measure it.

The measure of the convolutedness of a coastline is called the fractal dimension. Mathematically, this is a measure of how fast the length blows up as you measure it at smaller scales. A straight line has dimension 1. It has the same length no matter how you measure it. Meanwhile, a space-filling curve, which is so convoluted it covers the whole map, has dimension 2, and it turns out that if you shrink your ruler by half, the measured length doubles. South Africa has a fractal dimension of 1.02; Norway’s is 1.52, and Great Britain is right in the middle at 1.25. You can see how the coast of Great Britain looks at different scales by comparing the three maps below.

For comparison, the CIA World Factbook lists the length of the coast of the entire United Kingdom (not just Great Britain) as 12,429 km, and the independent World Resources Institute lists it as 19,717 km. Both of these are smaller than our estimate, but they probably used a measuring stick a lot bigger than 10 meters, so they still fit.

Now, back to the original question, the spacing of Britons along the length of their coastline according to our estimate should be:

If everyone in Great Britain went to the shore and started paddling, they’d be standing shoulder-to-shoulder.

I'm a full-time astrophysicist and a part-time science fiction writer.
View all posts by Alex R. Howe →
This entry was posted in What If? Rejects and tagged coastline paradox, fractals, geography, Great Britain, what if?. Bookmark the permalink.
%d bloggers like this: