Q: In Thor, the main character is at one point spinning his hammer so fast that he creates a strong tornado. Would this be possible in real life?

Randall’s response: (Facepalm) “NO.” Also, a picture of a woman attempting to do this with a regular hammer.

My response: The main problem with this is not that you wouldn’t be able to generate wind by swinging a hammer around. You definitely could. (It wouldn’t be very efficient, but you could do it.) The main problem is that a hammer spinning in a circle is basically a propeller—or in other words, a fan. And fans don’t create tornadoes. They only create straight-line wind.

These giant fans are designed to create the winds of a Category 5 hurricane force for testing the integrity of building. The blades spin around incredibly fast, but the wind only moves in a straight line. Thor’s hammer doesn’t even have a tilted fan-blade shape, so it won’t even make a very good fan. It will still push air aside as it swings, so it will create some wind, but it won’t be a tornado. 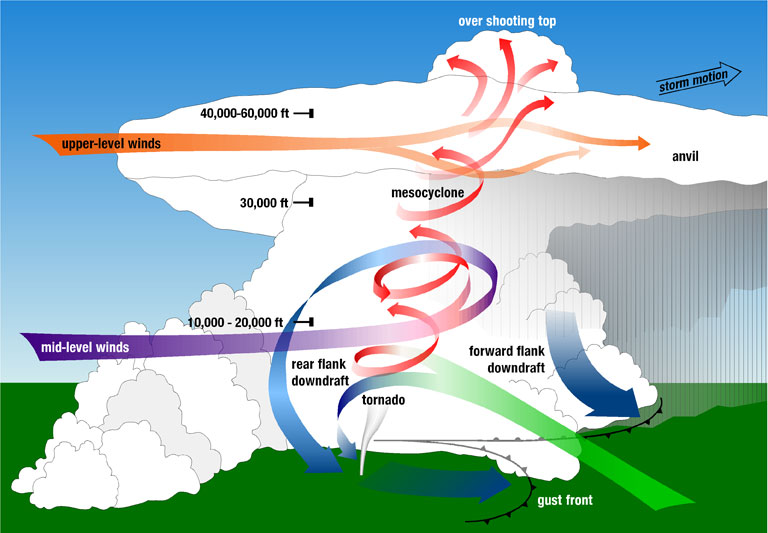 Tornados are formed when the air is already rotating in a storm known as a mesocyclone. A mesocyclone is much larger than a tornado, large enough for its rotation to be driven by Earth’s rotation through the Coriolis force. Downdrafts in the storm drive the mesocyclone down to ground level and in the process compress it down to tornado size. This compression causes the mesocyclone to spin faster, reaching the hundreds of miles per hour of tornado-force winds.

Not only doesn’t Thor’s hammer not create rotating winds, but the problem is even worse than that. Instead of compressing a large cyclone down. Thor has to pour enough energy into a small vortex to make it grow into a full-size tornado. Even if that were possible, the sheer kinetic energy required and the subsequent heat generated would probably cause an explosion rather than a recognizable weather system. After all, a strong tornado can contain a kiloton of kinetic energy, and it would be difficult at best to transfer all of that energy from the hammer into the wind without destroying everything in the area with waste heat.

So no, swinging Thor’s hammer around at any speed will not create a tornado.

I'm a full-time astrophysicist and a part-time science fiction writer.
View all posts by Alex R. Howe →
This entry was posted in What If? Rejects and tagged Thor's Hammer, tornados, what if?, what if? rejects. Bookmark the permalink.