Well, I’m back. I took a long hiatus from blogging after an even longer spotty record due to some personal stuff I’ve been dealing with. I may or may not eventually talk about that, but I’m going to try to get back on the proverbial horse and post here at least once a week. As a part of that initiative, I’ve decided to be more consistent about reviewing new books and movies that I read and see, and maybe a few other things, too, so watch this space for more updates. 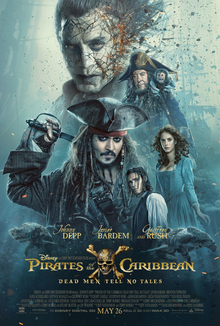 This week, the big new movie is the fifth installment in the Pirates of the Caribbean series, Dead Men Tell No Tales.

The reviews on this film have not been great, but I’m going to go out on a limb and say I liked it. I’m not saying that it’s up to the standards of the first three (though it’s way better than On Stranger Tides), and I’m not saying it’s without serious flaws, but I still thought it was pretty good. And I’m saying this as someone who usually finds myself agreeing with the critics. I thought they were dead wrong on this one.

Dead Men Tell No Tales opens a decade after the third movie, At World’s End, revealing that Davy Jones’ curse has followed Will Turner and the Flying Dutchman, trapping him under the sea. His twelve-year-old son, Henry, vows to find a way to break the curse.

Nine years later, Henry is still searching for the one man who can help him: Captain Jack Sparrow. But Captain Jack is washed up and penniless on the isle of Saint Martin, and the murderous ghost, Captain Salazar, is out for revenge against him. Throw in the “witch”, or rather, the astronomer, Carina Smith, who is sentenced to be hanged, and Captain Barbossa living like a king on the high seas, and you have the set-up for more pirate zaniness than ever. And all of them are searching for the greatest treasure of all: the Trident of Poseidon.

Now, I agree this movie has it’s problems. Johnny Depp is not up to the standard he set in the original trilogy, and the whole first half suffers because of it. Captain Jack is even more of a character than usual. Parts of the lore have changed, too, like Davy Jones’ curse coming down on Will Turner and the origin of Captain Jack’s compass. Plus, the historical inaccuracy is worse than ever. Notably, Saint Martin was never British. It’s half-French and half-Dutch and has been from the start. And don’t even get me started on the timeline. Seriously, don’t.

But for all that, this movie is fun. Even at the beginning, the “bank robbery” had me laughing out loud, but midway through, it really starts to get good. Around the time Captain Salazar tells his origin story, the lore of the whole series starts to come together, despite the changes. And the ending, in my opinion, was spot-on–tying everything together with the original trilogy and resolving everything in a satisfying way the way the fourth movie should have.

All in all, if you’re a fan of the Pirates series, Dead Men Tell No Tales is well worth watching.

I'm a full-time astrophysicist and a part-time science fiction writer.
View all posts by Alex R. Howe →
This entry was posted in Movie Reviews and tagged Dead Men Tell No Tales, Pirates of the Caribbean. Bookmark the permalink.

1 Response to Movie Review: Pirates of the Caribbean: Dead Men Tell No Tales