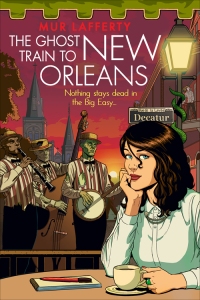 I previously reviewed Mur Lafferty’s breakout urban fantasy novel, The Shambling Guide to New York City about a woman writing a travel guide for monsters (or to be politically correct, “coterie”). Now, Zoë Norris is back for more adventures in The Ghost Train to New Orleans.

When we last saw Zoë, she had just learned that she is a “citytalker”–someone who can communicate with the spirit of a city and learn important information from it, like when one of the vampires, zombies, goddesses, dragons, or zoetists (people who make golems) who she works with is out to get her. Zoë’s newest assignment is to write a travel guide to New Orleans, where voodoo is the name of the game, so she takes her research team on the new Ghost Train, which can get her there from New York overnight.

But all is not well in Zoë’s world. Her boyfriend, Arthur comes with her to track down a legendary zoetist who is the only person who can save him from becoming a zombie. Then, the Ghost Train is robbed by ghosts, and Zoë is approached by a suspicious stranger who tries to recruit her to an assassins’ guild that employs the few surviving citytalkers. Oh, and one of her employees wants to eat her.

All in all, Ms. Lafferty has produced another stellar book. Steeped in mythology, equal parts humor and suspense, with new challenges, new villains, and a wider look at the world of the coterie, this is one sequel that is as good as the original. (Funniest moment: the Andrew Jackson hotel is run by the actual vampire Andrew Jackson, but is frequently picketed by Native American ghosts.)

I'm a full-time astrophysicist and a part-time science fiction writer.
View all posts by Alex R. Howe →
This entry was posted in Book reviews and tagged mur lafferty, the ghost train to new orleans, urban fantasy. Bookmark the permalink.
Loading Comments...
%d bloggers like this: