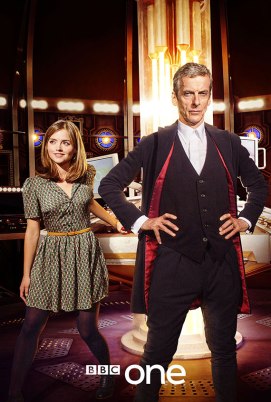 Doctor Who is one of the most successful science fiction franchises of all time, with (currently) 802 episodes to date spanning more than fifty years, three successful spin-off series, nearly 200 audio dramas, and what looks like several hundred books. The show recently began its “eighth series” (season) of the revived series, which began in 2005, with its twelfth regular actor playing the main character, the Doctor.

Warning: spoilers below.I actually have seen all 802 episodes (or listened to the lost episodes), although I’ve haven’t gotten much into the spin-offs, so I am familiar with all twelve incarnations of the Doctor, and my initial impression of Peter Calpaldi is cautiously optimistic.

I never judge a Doctor based on his first episode. This is because in his first appearance, the Doctor is always suffering from a “regeneration crisis”, which causes him to act strange and crazy while he gets used to his new body. In the Twelfth Doctor’s first appearance in “Deep Breath”, he must face off against robots that are killing humans for spare parts, talk to a Tyrannosaurus that is inexplicably 300 feet tall, and convince his companion, Clara, that he’s still the same man he was as Matt Smith, all while barely being able to remember his own name.

It’s a tall order, but Peter Capaldi pulls it off. “Deep Breath” was an excellent episode that introduces new mysteries and manipulations for the new series and lets Capaldi stand apart from his predecessors. Capaldi is significantly older than the other actors who played the Doctor in the new series–in fact, the second oldest ever to play the role. That combined with his “more alien” personality and his old-fashioned wardrobe hearkens back much more to the classic series, which aired 1963-1989.

Capaldi’s Doctor still retains a lot of the David Tennant/Matt Smith zaniness of the new series, his outfit is a clear throwback to Jon Pertwee, and his personality is said to be a “sort of Tom Baker, Jon Pertwee and even Christopher Eccleston style”.

However, that’s not the sense I got. The dark intensity of “Deep Breath” reminded me (perhaps wrongly) of Sylvester McCoy, the chess master, more than anything else. But “Into the Dalek” made it much clearer. There is a certain crassness to the Twelfth Doctor’s personality that could only come Colin Baker. That’s a risky move in my mind–riskier still, since it doesn’t appear to be intentional–since Colin Baker was not a particularly popular Doctor. It could be good, but it could also go very wrong.

And this is why “Into the Dalek” worried me. Don’t get me wrong, it was a lot of fun to see a miniaturized Doctor wander around inside a Dalek, it felt like a bit of a step down. Not only did his personality feel a little off, but the episode reminded me a little too much of Matt Smith’s second episode, “The Beast Below”, with Clara having to teach him the moral of the day and expose his hidden prejudice. It’s a nice story, but to have it in this position feels a little too formulaic and too abrupt.

Even so, I remain cautiously optimistic about Peter Capaldi, and I a eager to see where the new series goes.

I'm a full-time astrophysicist and a part-time science fiction writer.
View all posts by Alex R. Howe →
This entry was posted in TV Reviews and tagged doctor who, peter capaldi, twelfth doctor. Bookmark the permalink.
Loading Comments...
%d bloggers like this: