Things happen at random: The Phantom Tollbooth and Mary Poppins 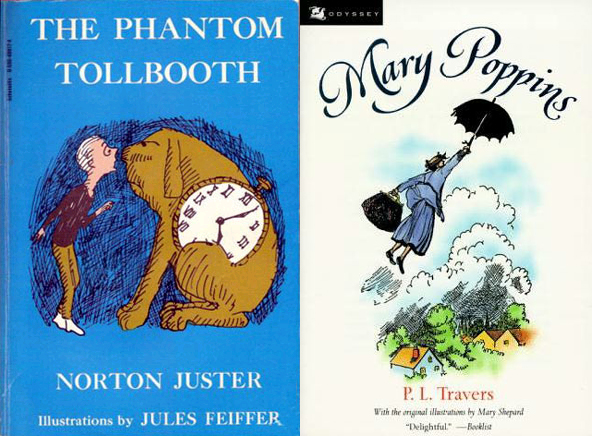 The Phantom Tollbooth by Norman Juster and Mary Poppins by P. L. Travers are two of the classics of children’s fantasy literature. Like much children’s fantasy, both books tell the stories of an ordinary child or group of children who are suddenly thrown into a world of magic and adventure. The circumstances are different, but several common patterns quickly emerge.

In The Phantom Tollbooth, a very bored boy named Milo is transported to a land of pure metaphor where he must travel through the Kingdom of Words and the Kingdom of Numbers, Fight the Demons of Ignorance, rescue the princesses, Rhyme and Reason; and in doing so, he learns to appreciate his life. In Mary Poppins, the Banks children (there are four of them in the book) go on adventures with their new nanny, who seems to cause the most ordinary day to become magical.

One of the staples of children’s books, especially fantasy, is that the children are usually isolated from their parents and other authority figures. This requires somewhat more suspension of disbelief than you might find in adult literature, since in the real world, responsible adults wouldn’t let children wander around on their own that much at all, let alone in dangerous situations. Mary Poppins is actually unusual in this regard, since Jane and Michael stay with their nanny, who is a responsible adult, but just so happens to be magical. The Phantom Tollbooth is more standard: Milo drives through a cardboard turnpike tollbooth that is mysteriously delivered to his room in a toy car.

Another feature that appears in some children’s books, but not others, is that they can be very episodic. After all, with children’s short attention spans, there is not all that much need for a plot. The epitomes of this trope are definitely Alice’s Adventures in Wonderland and Through the Looking Glass, and What Alice Found There by Lewis Carroll, which both read like 100-page opium-fueled dream sequences. Personally, I dislike this style. I think that children’s books are more fulfilling when they have a strong, overarching plot, and the ones that do will do a better job of appealing to both children and adults.

Both of these books follow the episodic pattern. The Phantom Tollbooth does have a plot, and a pretty clever one, the way little things from earlier keep coming back, and the wordplay was also excellent, like Alice in Wonderland, but with more plot and less opium. However, I was still put off by how much the action kept jumping around.

Mary Poppins, on the other hand, I was very surprised to learn has basically no plot at all. The children just go on a number of small adventures with Mary Poppins with no real pattern to them. In this case I think I was spoiled by having seen the movie first. Mary Poppins is one of the rare cases where I think the movie is much better than the book, which is ironic because P. L. Travers actually hated the movie. The movie actually does follow the book loosely, but the subplot of Mr. Banks learning to be a real father to his children, which I feel is the best part, doesn’t appear in the book at all.

Unfortunately, I can’t give very high recommendations for these books. Classics they may be, but I have to say that, at best, they’re not my style.

In Part 2, I will be examining two classics of Christian-influenced fantasy-adventure: The Horse and His Boy from the Narnia series, and A Wrinkle in Time.