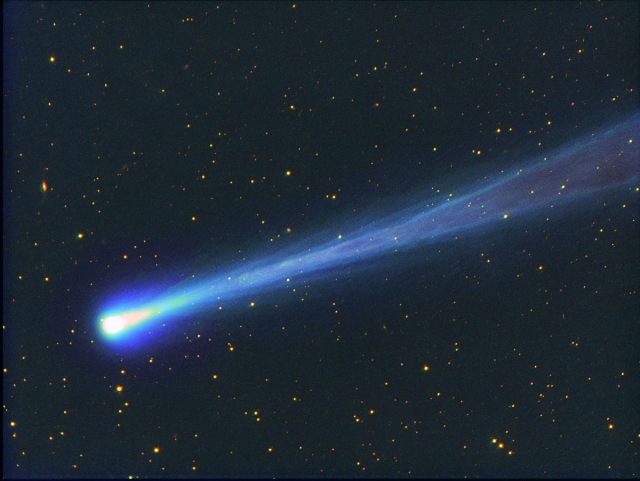 The northern hemisphere has been drawing the short straw when it comes to comets for the last few years. The last few really bright comets have all been in the southern sky. But that streak finally appears to be ending, with not one, but two comets in the northern skies that are visible to the naked eye.

You’ve probably been hearing about Comet ISON lately. The will-it-or-won’t-it hype has been growing as it finally brightens up, a little late. In a couple of weeks, ISON will make a harrowing perihelion pass only about 2 million kilometers from the Sun’s surface. Hopefully, it will survive, since other comets have gotten even closer to the Sun and survived. If it does, astronomers expect it to put on quite a show.

But right now, ISON is an early morning object. You’ll get your best view of it if you go out an hour or two before sunrise and look to the east. Near the bright blue star Spica, you should see a faint streak pointing straight up away from the horizon. That will be Comet ISON.

If your, a night owl, though, try and take a look at Comet Lovejoy, which has made a surprise comeback from a brief appearance earlier this year. You can see Lovejoy from about midnight on. Just look beneath the bowl of the Big Dipper. Lovejoy is making its closest approach to Earth right now (November 19), so don’t miss it!

Both ISON and Lovejoy are about at magnitude 5 right now, which is pretty faint, but not too hard to spot if you’re not in a city. But try to find some dark skies and dig out the binoculars, since that will likely give you the best view. Good luck.

I'm a full-time astrophysicist and a part-time science fiction writer.
View all posts by Alex R. Howe →
This entry was posted in Comets, Stargazing and tagged comet ison, comet lovejoy. Bookmark the permalink.
Loading Comments...
%d bloggers like this: