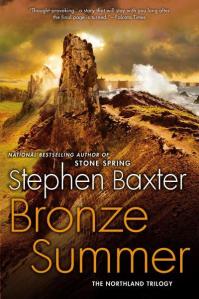 1159 BC. The Trojan War has been over for a generation. The Mycenaean Greek kingdoms are crumbling. The Empire of Hatti–known to the modern world as the Hittites–is hanging by a thread, saved from collapse only by gifts of imported maize and potatoes from a land unknown to our world: Northland. This is the world visited by Stephen Baxter in Bronze Summer, his followup to Stone Spring.

For six thousand years, the hunter-gatherers of we know as the North Sea have built and maintained the Wall, a single continuous building hundreds feet high and hundreds of miles long, keeping the ocean out of their homeland. The Northlanders are a proud and strong people, living off the land, carefully tending the dykes and earthworks of their country, and sending ships across the sea of the Americas. They stand as a bastion against the failing kingdoms of the east.

But when the ruler of Northland is assassinated by a new type of iron arrowhead, her daughter, Milaqa, must investigate and save her country from traitors within. Things grow worse when the Hekla volcano erupts in Iceland, setting off a period of global cooling and famines that will last for 18 years. The self-sufficient Northlanders can survive, but their neighbors, mostly subsistence farmers, are worse off. Soon, armies of bandits roam the countryside, some led by former friends, and all the political alignments must shift if Northland is to survive.

Once again, Mr. Baxter builds the fantastic out of plausible historical threads. The North American Mississippian Culture also maintained large earthworks and cities with relatively simple technology and a light footprint. The Vikings discovered that island hopping around the North Atlantic can get you from Europe to America with relatively short crossings of open water. A primitive form of concrete was used as early as 3000 BC in Mesopotamia. These and a few other precocious inventions of the Northlanders set them up as a major power.

Bronze Summer shares with its predecessor, Stone Spring, a similar style of skipping through time. Though it is admittedly not as much time, there is a remarkably similar pattern of a slow build-up of political intrigue followed by a relatively quick and almost glossed-over conflict. While it is still a very good read, it is not quite as satisfying as it could be with this genre-straddling mode. There is still a savoring of the intricacies of life at the dawn of the Iron Age for the enthusiasts. It is a little more mundane than the more distant world of the alternate Neolithic, but it certainly has its moments as the world faces the sunless years after the “Fire Mountain”.

I can’t fault Mr. Baxter’s style too much, since the pattern is clear and consistent over the course of the two novels, and it works well enough. However, I was a little disappointed in the characterization. The leading lady, Milaqa, is more passive and indecisive than her legendary ancestor, Ana, and her intriguing background as an independent, hard-drinking teenager is heard more than seen. Other great characters, like the mad Mesoamerican sculptor, Caxa, are underutilized, while many unsavory characters are promoted to leading roles. This, too, is part of Mr. Baxter’s conceit, but it makes for a weak point in an otherwise very enjoyable story.

In spite of this, though, I liked Bronze Summer as a worthy followup to its predecessor, and I am looking forward to the final installment in the Northland Trilogy, Iron Winter after its American release this fall.

I'm a full-time astrophysicist and a part-time science fiction writer.
View all posts by Alex R. Howe →
This entry was posted in Book reviews and tagged bronze summer, stephen baxter. Bookmark the permalink.
%d bloggers like this: