The diamond planet (that was once a star) 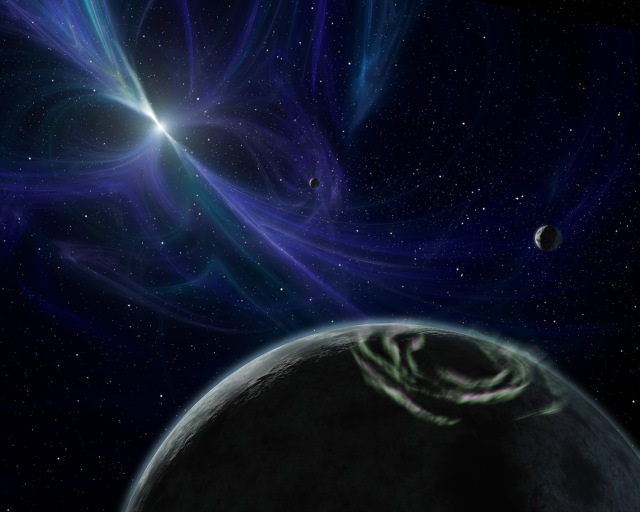 I’ve written before about pulsar planets, planets that form from the debris left over after a supernova, or that get captured from another solar system. But PSR J1719-1438 b is not like either of those planets. It’s a fragment of what was once a star and is probably made mostly of (very impure) diamond!

Here’s what happened. PSR J1719-1438 used to be a pretty normal binary star. The larger star exploded as a supernova and became a neutron star. Millions of years later, the smaller star expanded into a red giant. The gravity of the neutron star sucked away part of the atmosphere of the red giant and pull it onto its surface. It probably looked something like this:

The atmosphere falling onto the neutron star transferred some of the orbital energy of the system to it, making the neutron star spin faster and faster, until it was spinning around over 100 times per second! This is called a millisecond pulsar. Eventually, the atmosphere of the red giant blew away (separately from being sucked away by the pulsar), leaving a white dwarf behind.

But a white dwarf is not a planet. It’s Earth-sized, but it’s nearly as massive as our Sun. It’s generally considered a dead star. So what happened? Somehow, the white dwarf got into an orbit around the pulsar that’s only 2 hours long–perhaps due to tidal forces–and smaller than the radius of our Sun. (Not unlike the planets around Kepler-70.)

The pulsar is extremely hot and emits a powerful beam of hard radiation. And even though the white dwarf was incredibly dense and heavy, that beam was enough to slowly evaporate it away at that close distance. Now all that’s left is a chunk of dead stellar core about the mass of Jupiter, and that’s about the right size to be called a planet. It’s also the densest known planet. At 23 g/cm3, it is denser than any material that exists at the ordinary pressures of Earth, and the planet, though as massive as Jupiter, is only about the size of Neptune, less than half as wide.

A white dwarf is made mostly of carbon, and that’s mostly what’s left of PSR J1719-1438 b. Under the intense pressure, most of it’s interior has likely crystallized into diamond. Sadly, it’s not gem quality. White dwarfs contain huge amounts of impurities like nitrogen and oxygen, and even bits of neon and magnesium. Under the pressure, it would also have a weird cubic crystal structure instead of the octahedral structure of normal diamonds. It’s also probably still evaporating.

So it’s probably not a girl’s best friend, but still, it’s a diamond the size of Jupiter that used to be a star! Don’t ever let anyone tell you astronomy isn’t interesting.