In the sky: Saturn 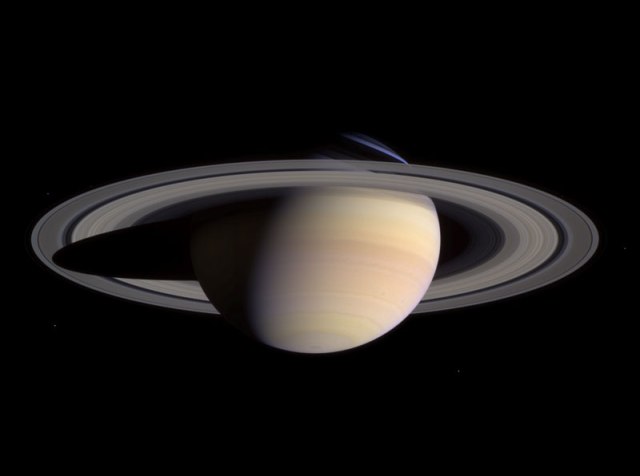 Saturn as seen by the Cassini Spacecraft. Credit: NASA.

Saturn is an old favorite for stargazers. The most distant of the classical planets, and widely regarded as the most majestic, its stately 30-year orbit means that it doesn’t move too much from year to year, making it easier to find, almost a fixture of the night sky.

This decade, Saturn shows itself prominently in the evening skies of late spring and early summer (in the northern hemisphere). While not as bright and obvious as Jupiter, it’s easy to spot. Just look to the south in the hours after sunset. They only other things that come close to it in brightness are Antares, which is much redder, and Spica, which is much bluer.

But the real beauty of Saturn comes when you train a telescope on it. The ringed planet is unique in the night sky in that it looks too vivid to be real. People looking at Saturn through a telescope for the first time will sometimes say it looks like a sticker stuck on the lens. Nothing else, not even Mars or Jupiter, looks anything like it.

Summer is a great time for stargazing, both because it’s warmer and because it’s usually clearer. So take some time, and watch the skies.

I'm a full-time astrophysicist and a part-time science fiction writer.
View all posts by Alex R. Howe →
This entry was posted in Stargazing and tagged cassini division, in the sky, rings, saturn. Bookmark the permalink.
Loading Comments...
%d bloggers like this: