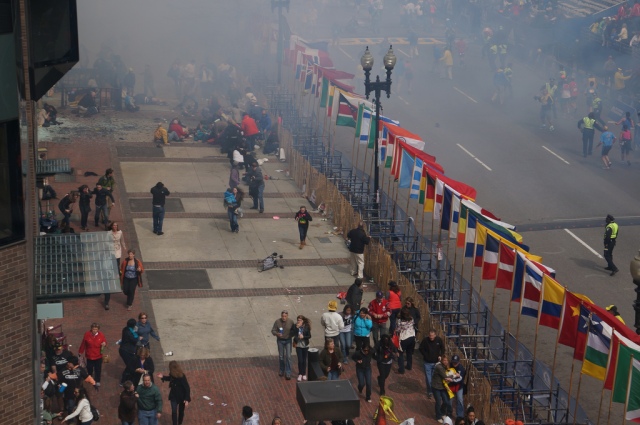 The immediate aftermath of the bombings. Credit: Aaron Tang.

By now, you probably know all about the bombings at the Boston Marathon last week that left 3 people dead and 176 injured. It has its own Wikipedia page now, if you’re not up to speed. In the ensuing investigation, authorities were led to Tamerlan and Dzhokhar Tsarnaev, who are also believed to have killed a police officer on Thursday night. After two shootouts with the police and an exhaustive manhunt that locked down the whole city of Boston, Tamerlan would up dead and Dzhokhar is now in the hospital and in custody.

The ordeal may not be over yet, as there are reports—from the British papers, oddly enough—that a larger “sleeper cell” may be involved. Still, we can be cautiously optimistic that any further attacks have been thwarted, so the city of Boston and the country can breathe easier moving forward. Certainly our prayers are with the victims of these horrific crimes as the investigation continues.

But there is one aspect of the aftermath of the bombings that is of technological interest. In the days following the attack, Internet forums such as Reddit began combing over thousands of photos taken by spectators at the marathon, looking for anyone who looked suspicious. They singled out about a half dozen people carrying bags large enough to hold the bombs…and then the pictures went viral.

One photo in particular, featuring two innocent men who had the bad luck to be photographed practically on top of the spot where one of the bombs later went off, was printed on the cover of the New York Post, which rightly triggered a backlash. In fact, the FBI released the photos of the real suspects in part to “limit the damage” to those who were falsely accused.

In the end, none of the people singled out by Reddit were the actual suspects. We now know that the bombs were planted just a few minutes before they exploded, limiting the chances for people to get pictures of them.

The subreddit that was doing the searching quickly drew back and tried to take a more responsible tack, limiting the posting of photos outside the forum, stressing that they were not positively identifying suspects, and sending what information they did have to the authorities. But the damage was done. Innocent people were accused, and the subreddit itself was derided as a band of vigilantes.

It’s obvious that the Internet screwed up here, but I don’t think this is entirely the right attitude to take. The idea behind the effort—that combing throught the many photos taken by spectators (far more than would have been available from security cameras) could potentially locate the perpetrators quickly—was not a fundamentally bad one. It’s what David Brin calls a “smart mob”: “smart” because it’s supposed to avoid the witch-hunt mentality of the traditional mob. Unfortunately, this mob was not smart, or at least not smart enough. In other words, the problem was one of quality control, and I think there are several very good reasons not to jump to a blanket demonization of smart mobs.

This is a quibble, all things considered, but words do mean things, and vigilante is one that is commonly misused. The Random House Dictionary defines a vigilante as “any person who takes the law into his or her own hands, as by avenging a crime.” And while false accusations were flying fast and furious, the people who came into direct contact with the suspects did the responsible thing and contacted the authorities. In this “see something, say something era”, I don’t think that the Internet investigation, done right really qualifies as vigilantism.

The traditional media isn’t much better.

You’re never going to stop it.

Even if Reddit strictly polices itself in the future and doesn’t get into this kind of business again, more lawless parts of the Internet like 4chan and its derivatives might not be so principled. Moreover, social media is still growing, and camera coverage is increasing exponentially. This sort of crowdsourced investigation will become easier in future years, meaning that it will become that much more tempting. After all, we’re an information-driven society: people aren’t just going to sit still when they don’t have to.

We should empower people.

The Homeland Security Department and even the investigators on this very case love to say, “If you see something, say something.” Those same investigators have criticized the “witch-hunt that took place, and rightly so, but we should not jump all the way to the point of, “Sit down and let the professionals handle it.” Instead, we should recognize that people are willing and able to make these kinds of efforts, and we should and put them to good use, which brings me to my final point:

Yes, the photographic, crowdsourced manhunt failed in 2013, but what about in 2023, when many people will have Google Glass, or something like it? How about in 2033, when (as likely as not) practically everything in major city centers will be recorded? The sheer volume of data suggests crowdsourcing, and if the problem is one of quality control, maybe we should be looking at ways to improve the quality. To that end here’s my two cents about how the Internet should handle something like this:

Be clear upfront that the people who are identified are not necessarily suspects, but only

persons of interest.Search the photos for everyone carrying a bag large enough to hold a bomb.Try to follow the movements of those people across photographs and look for anyone who does something genuinely suspicious, like setting a bag down and walking away.Report this information to law enforcement.If they proceed further, they should pay particular attention to information that

the involvement of the people they’ve spotted instead of throwing accusations around.

racially profile. After all, these bombers were whites of Chechen descent.

get hung up on small details like where people are looking and how they react to things. People do random things all the time, and it’s very hard to tell what’s going on from still photos.

try to match details in the before and after pictures when the photos are too blurry to do so reliably.

If the Redditors and others had done these things, they still might not have found the real suspects, but they would have been a lot less likely to make false accusations, and the people on the receiving end of that would be a lot better off for it.

Quality control is important to a lot more things than Internet investigations. I’ll discuss some of the issues more relevant to daily life in future posts.