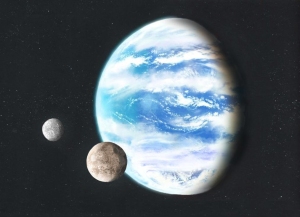 For a few planets, we’re a little better off: we know both their masses and their diameters. That means we can calculate their densities and make some guesses about what they’re made of.

That might be right…or it might be completely wrong. The amount of hydrogen in a planet’s atmosphere depends on the planet’s temperature and gravity, which determine how much hydrogen escapes into space. It’s possible that a planet a only a little bigger than Earth holds onto a lot of hydrogen, making it a “mini-Neptune”. It’s also possible that super-Earths lose most of their hydrogen, leaving them with thin atmospheres, like Earth–or at least like Venus. Maybe all three things all possible in different circumstances.

But there is another intriguing possibility. Remember that planets can migrate over time, and many times, they migrate from the cold outer reaches of their solar systems to the hot inner regions. A planet that forms in cold regions, farther from its star than the so-called “snow line“, will have large amounts of water ice (for example, the dwarf planet Pluto is believed to be 30%-50% ice).

When an icy planet migrates to a warmer climate, the ice melts, forming a very deep ocean–possibly hundreds of miles deep! And below that might be even more ice, compressed into a solid form by the pressure, and there will be no land at all. Even if the planet’s temperature is above the normal boiling point of water, the pressure of the steam atmosphere will keep the ocean liquid. This type of planet is called an “ocean planet” or a “waterworld”.

So what are the super-Earths made of? With modern planet-hunting technology like the Kepler spacecraft, we are starting to learn about some of them, and they’re starting to look like there are many different kinds. The planet Kepler-10b is about 5 times Earth’s mass, but only 1.4 times its diameter, making it denser than Earth. That means it’s probably a “super-Mercury” made mostly of iron with some rock on top and a thin atmosphere.

On the other hand, the best-studied super-Earth is GJ 1214b. I’ve actually spent some time studying it myself in my research career. (Here’s the link, for the technically-minded.) This planet is only a little heavier than Kepler-10b, at 6.5 times Earth’s mass, but it’s much larger, at 2.7 times Earth’s diameter. That makes it barely denser than Neptune, and not even dense enough to be a waterworld (Neptune is denser than water, and water is usually called “incompressible”, but it actually compresses a lot under high enough pressure.) Just based on these observations, GJ 1214b should have a thick hydrogen atmosphere.

But GJ 1214b is a transiting exoplanet, meaning that it periodically blocks some of the light from its parent star. And just as the absorption of certain frequencies of light by the star itself tells us what the star is made of, the tiny absorption of certain frequencies by the planet’s atmosphere can tell us what the atmosphere is made of. As small as they are, we can detect these changes.

A hydrogen atmosphere should be easiest to spot because it would be very thick, but we don’t see it. For this reason, it was widely reported that GJ 1214b was a waterworld, but there remains quite a bit of debate among the astronomers who continue to study it. In the end, I think the jury is still out. GJ 1214b might be a waterworld, or it might have a thick hydrogen atmosphere obscured by thick clouds. Or it could be something else. Hopefully, we’ll be able to figure it out as more observations are made.

I'm a full-time astrophysicist and a part-time science fiction writer.
View all posts by Alex R. Howe →
This entry was posted in Planets and tagged gj 1214b, super-earth, waterworld. Bookmark the permalink.
Loading Comments...
%d bloggers like this: