In the sky: Jupiter

Jupiter and its moons as seen through binoculars. Credit: Steve Ryan.

Look to the east after sunset, and you will see a particularly bright star, which is not a star at all–it’s the planet Jupiter. Jupiter is a favorite target of amateur astronomers because it’s one of the easiest objects in the sky to observe, and it’s always changing.

Jupiter is the fourth brightest thing in the sky, after the Sun, the Moon, and Venus. Since Venus stays inside the orbit of Earth, it stays close to the Sun, but Jupiter wanders all around the sky, making it easy to observe during the darkest part of the night.

The first thing you’ll notice about Jupiter, if you look at it through binoculars or a small telescope, is that it has moons. You can usually see some or all of the four large Galilean moons laid out in a line with Jupiter, and if you watch from night to night, you can even see them move.

Jupiter without its Southern Equatorial Belt, and three moons, as seen through a large telescope. Credit: Steve Elliot.

If you have a larger telescope, you can see the cloud features on Jupiter. The easiest things to see are the Northern and Southern Equatorial Belts, two wide brown stripes of clouds across Jupiter’s middle. With good enough eyes, you can also see the Great Red Spot, and the smaller temperate belts zones, although the colors might not come through very well, partly because of Earth’s atmosphere.

Each dark “belt” and white “zone” is a separate jet stream in Jupiter’s atmosphere, and they can move around, just like Earth’s jet stream. Most recently, the Southern Equatorial Belt disappeared for most of 2010, probably by sinking beneath the lower white clouds, before coming back in 2011. The change was easy to see from Earth, as the picture above shows. 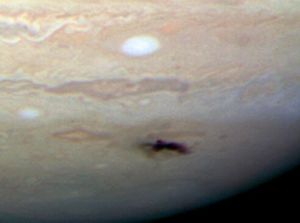 The aftermath of the 2009 Jupiter Impact as seen by the Hubble Space Telescope. Credit: NASA, ESA, and H. Hammel (Space Science Institute, Boulder, Colo.), and the Jupiter Impact Team

Now for the observing challenge. Sometimes, asteroids and comets crash into Jupiter. The most famous was Comet Shoemaker-Levy 9 in 1994, but smaller objects hit it every few years. From Earth, these impacts can be seen as a flash of light followed by the formation of a dust cloud that can be as large as Earth and last for days.

The cool part is that there’s almost always someone observing Jupiter, at least when it’s up over North America, so the amateur astronomers can spot all these changes right away, even before NASA does. Recently, amateur astronomer Dan Peterson saw a flash of light on Jupiter that he thought might have been an impact and reported it to other astronomers on the Internet. As it happened, astrophotographer George Hall had his camera rolling at that time and found that he had recorded the impact on video.

So take some time to look at Jupiter, and you just might see something new.

I'm a full-time astrophysicist and a part-time science fiction writer.
View all posts by Alex R. Howe →
This entry was posted in Stargazing and tagged astronomy, jupiter. Bookmark the permalink.
Loading Comments...
%d bloggers like this: